In 2013, Mark Warr found himself overweight, suffering from arthritis in his knees, and being forced to use a walker to get around.

“Using a walker was embarrassing for me. It was demoralizing. I was getting ready to retire and it was a sign that I wasn’t going to have the retirement I was looking forward to. In retirement my wife and I wanted to travel and see and do things that require walking.  On the days I had to use the walker I would just say: ‘The retirement we had envisioned was not going to happen.’”

To treat the arthritis Resurgens Orthopaedics recommended dual knee replacement but the surgery wasn’t going to be successful unless Mark lost weight. Over the course of the next year Mark lost an amazing 75 pounds and returned to Resurgens to have his knees replaced; his left knee in October 2014 and his right knee in April of 2015.

“They were great knee replacements! The surgeon wished he had taken video of the first one because it went SO well.  Before the knee operation I had made a commitment to swimming and taking a spin class two times a week. I was still losing weight, but I wanted my muscles to be strong after the surgery.”

After his first knee surgery and rehabilitation, Mark was able to walk without crutches and felt better than before the surgery. That was the moment he knew things could be better.

After both successful surgeries Mark was sent to the Resurgens Rehabilitation clinic in Austell, where our team helped him over the final hurdle.

“They were great! They were encouraging! They were tough and they gave me the experience I needed. They engaged me in conversation; they kidded around with me and kept my mind off the pain during rehab. They were always happy when I walked in and I felt like I was going someplace that wanted me there. The rehabilitation therapists really made going to rehab, oddly enough, something to look forward to.”

In 2013, Mark Warr found himself overweight, suffering from arthritis in his knees, and being forced to use a walker to get around. The retirement he and his wife envisioned wasn't possible. But after two successful knee replacement Mark and his wife are looking forward to seeing and hiking all over the world! 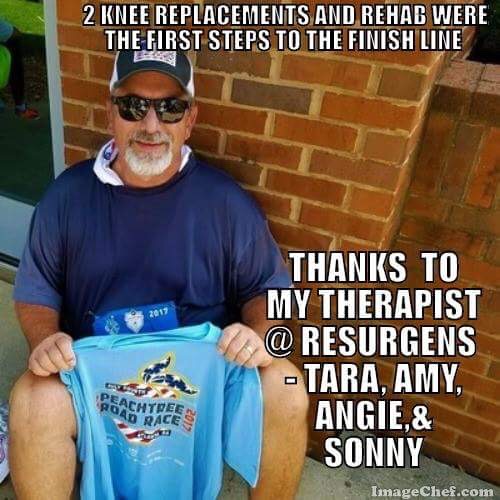 With healthy strong knees Mark began working towards his goal of completing the Peachtree Road Race. His training began with walking and biking short distances, slowly increasing the distance each week eventually up to five miles. When he hit this benchmark, Mark felt like he was finally ready to take on the race.

But the Peachtree Road Race isn’t just five miles; it’s two miles to get to the staging area, six miles of the actual race, and then two miles back to your car. Yet at the completion of the race, Mark didn’t feel good – he felt great!

Mark and his wife are now planning for a retirement they didn’t think was possible a few years ago.

“We are going to Alaska, Mt McKinley, and Denali National Park with lots of hikes and then we’re going to walk through Vancouver. My wife is thrilled with my recovery; it keeps her from being restricted. We recently did a three mile walk together through Sweetwater Park which she loves to do and it’s something we never could have done together before the knee surgeries. And now we’re looking forward to exploring Italy together. She has a full partner again.”